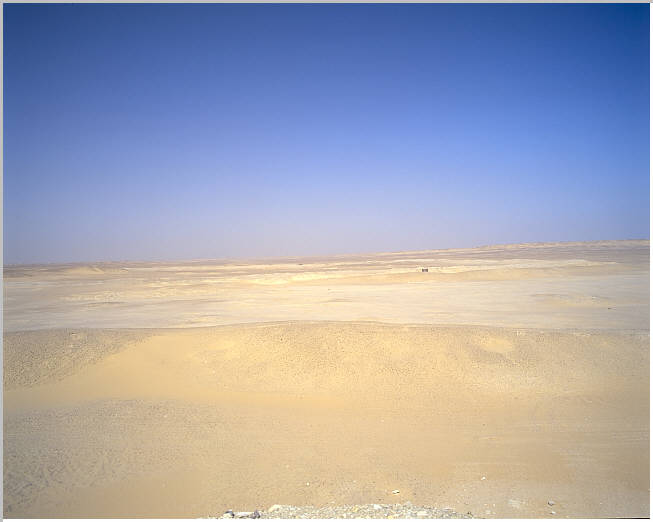 Gisr el-Mudir "The Great Square" or "enclosure of the boss' is located several hundred meters out into the desert just west of Sekhemkhet's pyramid. It is believed to date to the 2nd dynasty. When excavated in the mid 1990s the walls of Gisr el Mudir was found to be a masonry of roughly hewn limestone blocks in layers. The base was made of two outer walls c. 15 meters apart with an inner filling of rubble, scrap stones and sand. This structure and traces of others like it were first noticed in the 1920s with the emergence of aerial photography, but they were too difficult to excavate. It is only in recent years, with the use of new technology, that Egyptologists have been able to properly investigate these enclosures. The enclosure of Gisr el-Mudir measures approximately 650 by 350 meters and its walls are a massive 15m wide at their base. The enclosure wall seems to have been completed and no trace of a structure has been found inside the walls, which rules out the possibility of a pyramid and so its purpose is still unknown. Pottery recovered from the rubble fill of the enclosure walls dates the structure to Dynasty II, predating Djoser's complex by several years. This and other enclosures in the area bear a remarkable resemblance to the mudbrick mortuary structures found in the desert at Abydos, especially the largest, Shunet el-Zebib, which has been identified as belonging to King Khasekhemwy of Dynasty II. Limestone was more readily available for building purposes at Saqqara than at Abydos, and it is just possible that the Abydos monuments were a reflection of experiments begun at Saqqara during this period. Several Dynasty I and II tombs have been found at Saqqara which make use of limestone for lining, roofing and portcullis slabs, suggesting that the quarrying and use of stone was developed in this area. Recent findings at Khasekhemwy's Abydos tomb have strengthened the belief that the king was Djoser's immediate predecessor - a seal impression on the tomb doorway suggests that Djoser buried Khasekhemwy. It is therefore not unreasonable to suggest Khasekhemwy was the builder of Gisr el-Mudir, which Djoser then copied and developed into his Step Pyramid complex. If this is the case, then Khasekhemwy and not Djoser should be heralded as the builder of Egypt's first stone monument.

Gisr el-Mudir is visible in the middle ground as slightly elevated part of the desert floor. This view was taken just west of Sekhemkhet's Pyramid