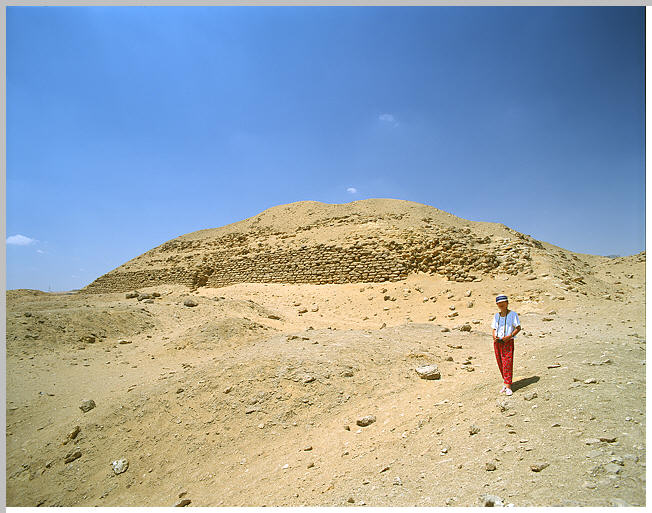 The Pyramid of Khaba -The Layer Pyramid

According to Egyptologist Jacques Kinnaer, Khaba was the successor Sekemkhet, and the 3rd King of the 3rd dynasty. He ruled from 2631 to 2619 BCE, a total of 4 years. In the King-list Khaba is called Hudjefa. His pyramid is the so-called Layer Pyramid at Zawiyet el-Aryan. The pyramid is a step pyramid in the early stages of construction. The superstructure is typical of 3rd dynasty masonry, consisting of 14 accretions, leaning inward against a central core. Completed the pyramid probably would have risen 42-45 m. Today it is about 20m high. No trace of the casing were found indicating that the pyramid was never finished. The identification is from alabaster vessels found at nearby mastaba Z-500 just north of here. His name was found inscribed on these vessels. The area is very near a military compound, you even hear 'gunshot' practice. It is on the edge of a little town about a 10 minute walk out in the desert. The locals said that the name Zawiyet el-Aryan, has not been used in several decades thus giving the driver some difficulty in locating the area. The site is about 4km south of Giza.