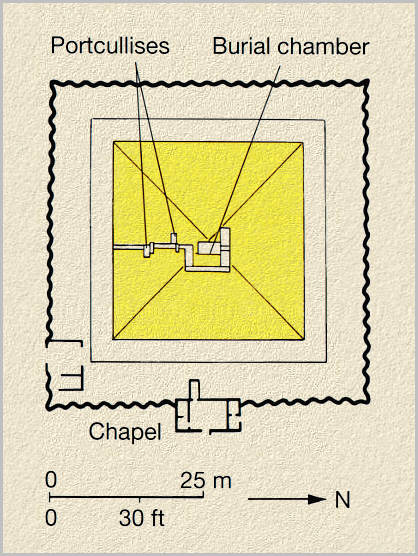 The Northern Mazghuna pyramid was never finished, nor did it ever receive a burial - the lid of the sarcophagus was parked in its chamber and the blocking slab that would have been slid across to lock it in its position was in its recess.

The Pyramid of South Mazghuna had a base length of 52.5 m. Though it had a complicated substructure, the superstructure was never completed.

The South Mazghuna Pyramid - About 4.8 km south of Sneferu's Bent Pyramid, it was surrounded by a wavy wall of the kind that we begin to see in earlier middle kingdom monuments. The ruins of the pyramid, heavily damaged , were investigated by Ernest MacKay in 1910. Whereas the mudbrick core can still be discerned, no trace of the limestone casing has been found.. The inclination of the wall and the height of the pyramid thus remain unknown. Presumably, it basically resembled the pyramid at Hawara, though not in its dimensions. This view as well as as well as the attribution the Amenemhet IV are based on the ground plan of the substructure and the way the burial chamber was built. The entrance to the underground part of the pyramid was on in the middle of the south side.
The North Mazghuna Pyramid - As in the case of the South Mazghuna Pyramid, the North Pyramid is attributed solely on the grounds of a few bits of structural and archeological evidence to Queen Sobekneferu. She reigned not quite four years, and her relationship to the previous rulers has not determined with certainty. It is assumed that she was Amemmehet III's daughter and the full or half sister- and possibly a consort- of Amemmehet IV. The North Mazghuna Pyramid was larger than the South Pyramid, and the plan of its substructure is more advanced from a typographical point of view.. Although the pyramids substructure was completed, no one was buried in it. Moreover, neither the pyramid's superstructures nor the complex as a whole was ever completed 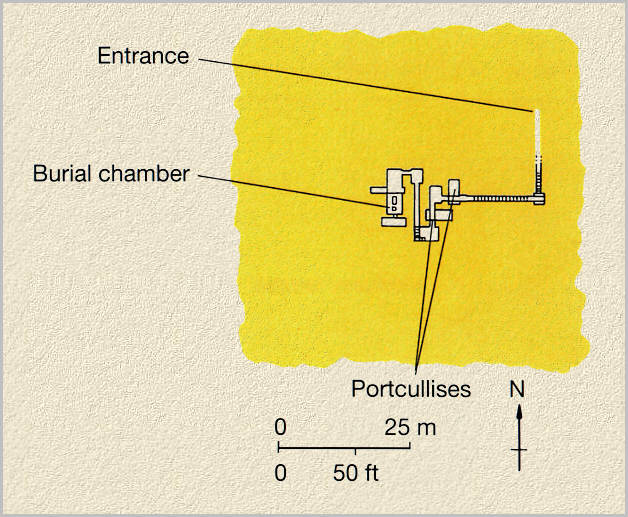