The Pyramid of Amememhet II

Amememhet II's hybrid pyramid complex: a long rectangular precinct, as in the 3rd dynasty, oriented east-west as in the 4th dynasty, and with massive pylons, as in the 5th . 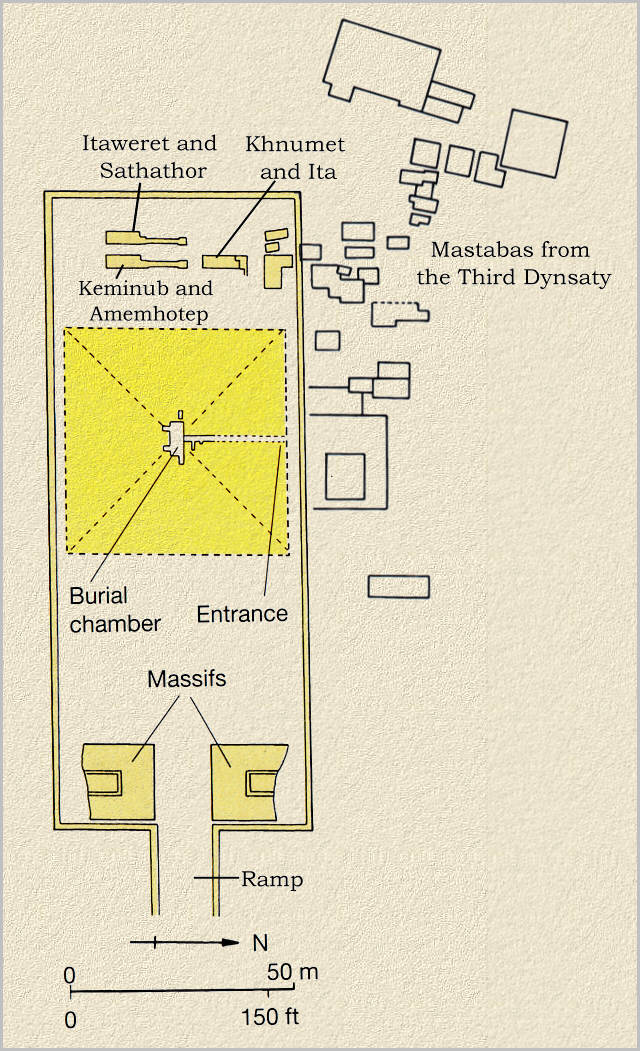 The pyramid of Amememhet II is today but a hardly recognizable heap of rubble It is called the White Pyramid by the locals. The pyramid was heavily quarried and the casing and most of the core have disappeared. Arnold considers this pyramid a second phase of the middle kingdom due to the constructions techniques. It incorporates elements from the third, fourth and fifth dynasties. The enclosure is oriented east-west and is situated near the escarpment about halfway along the Dahshur plateau. From this point onward pyramids would be built between Dahshur and the month of the Fayum. The pyramid has been poorly investigated, most of it thorough the efforts of De Morgan in 1894-5, who mainly concentrated on the jewelry and personal items of two princesses, Khnumet and Ita, whose burials he found among a row of tombs west of the pyramid within its enclosure. The entrance to the pyramid is the middle of the of the north side. I reached the pyramid by stopping at the by the Dahshur road and walking 10 minutes through the soft sand. The pyramid itself is somewhat difficult to recognize as just a hill of sand and rubble. Some stones artifacts lied in a pit which I figured was the excavated pyramid. The Egyptologist, Mamdouh Taha, who accompanied me, had never actually been to this site and we used Lenher's maps to locate the ruined pyramid. Half way to the site the taxi driver and Mamdouh were called back to the car. Upon returning ( I too was called back to the car) we drove to the nearby police station at the month of the Fayum road. Mamdouh was hassled by the police who eventually took away some of his paperwork. He eventually got it back through a relative of his who worked for the police. Mamdouh was rather shaken by the whole event. Although I was given permission to visit the site by the chief inspector at Giza.