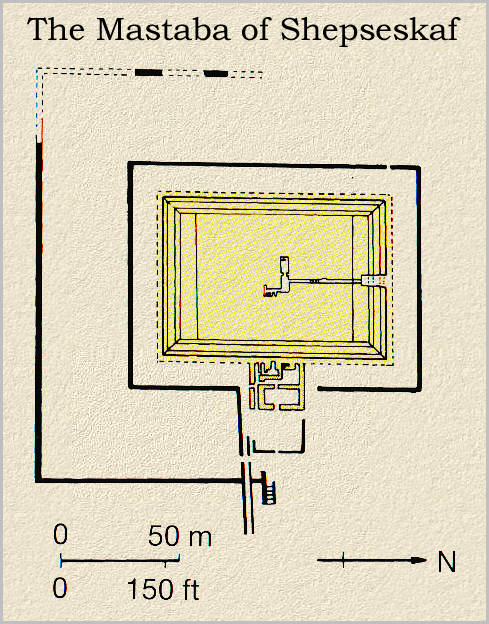 Click on areas of interest to view details.
The Mastaba of Shepseskaf

Shepseskaf built an enigmatic structure in South Saqqara which the locals call Mastabat el-Fara'un. He was the last ruler of the fourth dynasty an reigned for perhaps 5 years. His pyramid resembles a giant mastaba and is located a few dozen meters southeast of the 6th dynasty pyramid of Pepi II. The stone quarry for the structure is located west of the North Pyramid of Sneferu, the construction ramp for transporting stone has been discovered. It's ironic that Pepi II and Shepseskaf, located next to each other, represent the end of the old kingdom and the end of the majestic fourth dynasty. The core is built somewhat like a pyramid, perhaps intended to be transformed into true at some some later date? The entrance is a couple of meters up on the north side. Remnants of a pyramid temple exists on the east side, with part of the causeway. A mud brick perimeter wall is present some 15 meters away the edge of the mastaba, this can be clearly seen on the western side. The riddle of why Shepseskaf built his tomb here, and why he choose a mastaba like structure is not yet resolved by Egyptologist. Certainly it has something to do with the transition from the 4th to the 5th dynasties.

The purified Pyramid --- Shepseskaf is purified