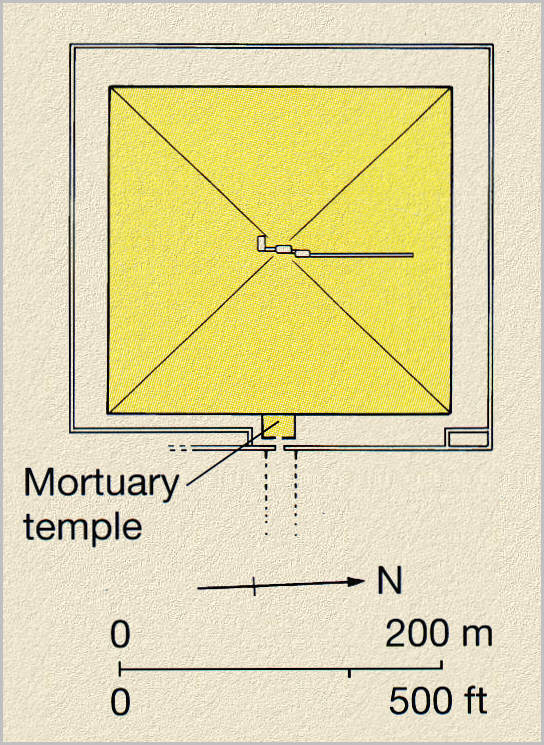 "The shining Pyramid" is King Sneferu's 2nd attempt to build a pyramid at Dahshur. Today the casing is almost totally gone, it draws it's name, The Red Pyramid, from the color of its locally quarried limestone core. The site has been visited by European traveler's since the middle ages. Modern archeological research began with Perring and Lepsius in 1839 and 1843 respectively. The casual 43° 22' slope is the same as the upper part of the Bent Pyramid. Suggesting that the Ancient engineers followed the Bent Pyramids design. Egyptologist have identified cracks inside the the Bent Pyramid, suggesting that the builders were concerned with its stability and built the North pyramid with the less steep slope to reduce the stresses on the inside of the pyramid. However this is still a theory. The inner chambers of the Bent pyramid have not collapsed after some 4500 years. The cracks in the bent pyramid may have been caused by earthquakes. The pyramid can be entered from a shaft 28m up in the middle of the north face. The inside has two corbel vaulted ceiling chambers. The entrance to the burial vault is in the south wall of the second chamber, about 8m above the floor. The burial chamber is oriented east-west, as opposed to the two anti-chambers, which are oriented north-south. The pyramid was clearly finished during the life of Sneferu, but this is not true of the other buildings that form the pyramid complex. The Red Pyramid has a small offering chapel in the middle of the east side, it is surrounded by a mud brick wall. The whole was originally surrounded by a perimeter wall of which traces still remain. It was rectangular in shape and oriented east-west. A cult pyramid has yet to be found and may never have existed.