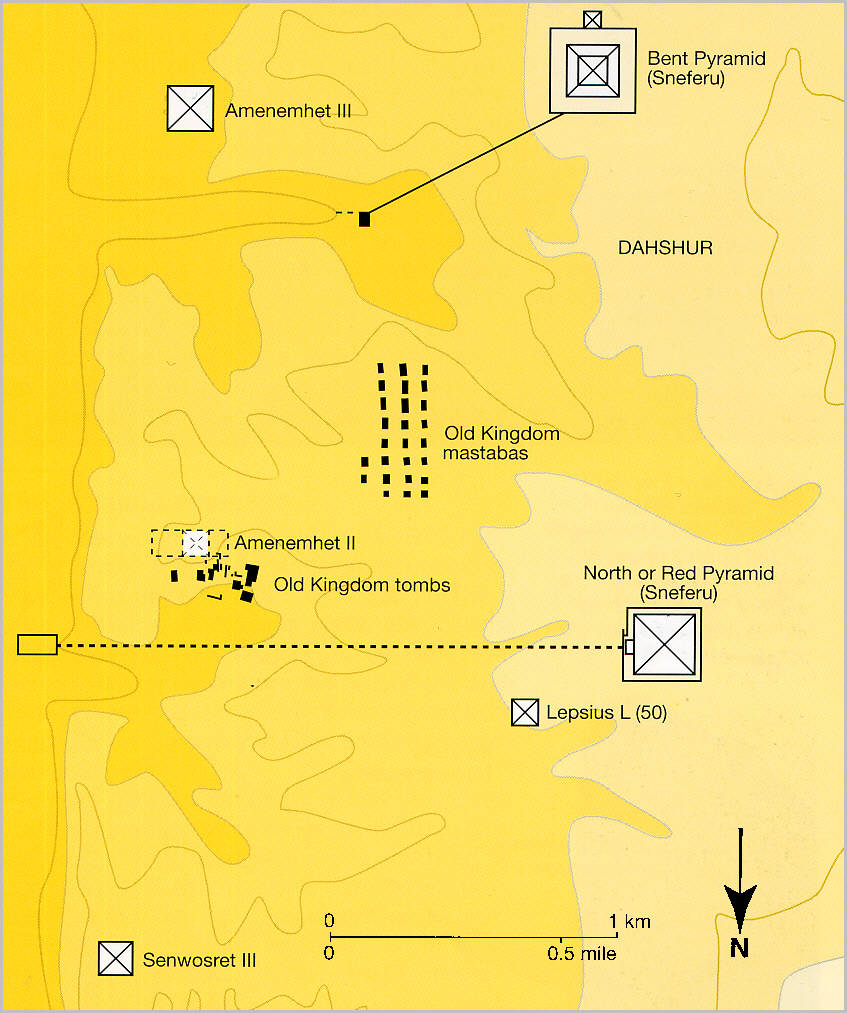 The Pyramids of North Dahshur are dominated by the huge pyramids of Sneferu, the Red (North) pyramid and the Bent (South) pyramids. Sneferu was the founder of the 4th dynasty and ruled Egypt for at least 24 years. It is believed that the knowledge gained from the construction and engineering of the Dahshur Pyramids was essential in the construction of the Great pyramid of Khufu at Giza. For the two North Dahsur Pyramids immediately precede the Giza pyramids and Sneferu was the father of Khufu. The site is relatively easy to reach, as a road goes right up to the Red pyramid, and a desert road continues 2 Km further in to the desert to the Bent Pyramid. The site is 20Km south of Giza by road. These two pyramids are in fact the first true pyramids in Egypt. North Dahshur has a least four other recognized pyramids, all from a much later period. The most prominent of these being that of Amememhet III, a 12th dynasty Middle Kingdom ruler, the Black Pyramid. This is owing to it's appearance in modern times. The original limestone casing was removed in ancient times and the mudbrick core has slumped into a heap, with the dark color of the mudbrick contrasting against the yellow of the Sahara. The pyramid is difficult to reach,. the easiest way is a 30 minute walk just south of the Bent Pyramid. The mudbrick pyramid of the 12th dynasty king Senwosret III, can be seen on the way in, on the right next to the refinery. The other two pyramids are are subjects of interest mostly to Egyptologist, The That Amememehet II and Lepsius 50 (L).