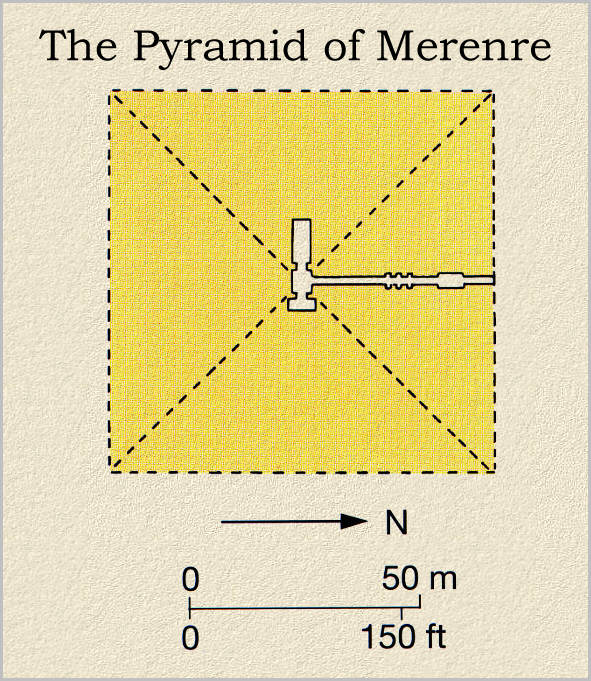 Menrenre, eldest son of Pepi I ruled for only 9 years. He built his pyramid not far from his fathers, 450m southwest of Pepi's and the same distance directly west of the pyramid of Djedkare-Isesi. Today Merenre's pyramid is hardly more than a heap of rubble. The entrance to pyramid can be found on the north side. The portcullis granite blocking stones are visible due to the efforts of grave robbers. Very little is known about the pyramid since no thorough excavation has yet been done. A slab of limestone from a small chapel at Abydos is inscribed with some of the very rare contemporary texts about the building of a pyramid. The hieroglyphs convey to us the voice of Weni, whose career spanned the reigns of Teti I, Pepi I and Merenre. Weni became Governor of upper Egypt. He states that pink granite from Aswan, alabaster from Hatnub, and dark greywacke from the quarries in Ibhat, were brought to the pyramid. This stone was used to make the pyramidion and the sarcophagus. Inside the pyramid Maspero found the mummy of a young man whose hair was combed into a side curl such as those worn by children in ancient Egypt. Some debate exist between Egyptologist but the consensus is this is indeed the mummy of Merenre.