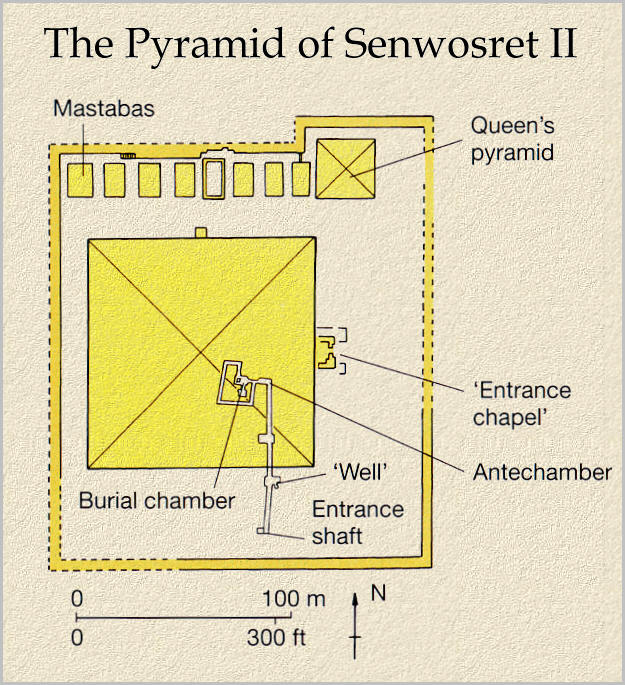 The site is relatively "easy" to get to. Although it's a long expedition into the Fayum, and requires a complete day. Usually the sites of Hawara (Amenemhet II) and Meidum are part of the itinerary. On the way to Senwosret II's pyramid, one must drive through the town Il-Lahun and along a canal to the edge of the desert. Seeing the ruined pyramid at a distance through the green cultivation is truly amazing. The bright yellow sand is quite a contrast to the dark green of the cultivation. The canal looks very ancient and one can see mudbrick walls along the route. The pyramid has a mudbrick core, but the base is built into a natural yellow limestone hillock. Senwosret II, the successor of Amenemhet II (north Dahshur) and the fourth pharaoh of the twelfth dynasty. The site is not far from Kom Madinet Ghurab, an important site during the eighteenth and nineteenth dynasties. The name of the site seems to derive from the Egyptian ro-hent, 'entry of the canal,' which in Coptic became lehoné. The pyramid was built on a small hill 12m high, using a special technique which involved large blocks of limestone placed in a radiating fashion, the places between filled with unfired brick and then covered with limestone slabs. Access to the interior was through the eastern portion of the south side, through two shafts. Shaft tombs were also dug on the south side, including the tomb of Princess Sit-Hathor-Iunet, the daughter of Senwosret II, in which Petrie found sumptuous funerary trappings known has the Treasure of Il-Lahun. The inner enclosure wall had a limestone casing that was decorated with niches, which, like Senwosret I's , is a nod to Djoser's complex and Archaic funerary enclosure. Rows of trees of an unknown variety were planted parallel to the outer enclosure wall of mudbrick. The grove around the "mound" is another strong Osirian symbol (which was on the rise during the 12th dynasty). The mortuary temple is on the east side of the enclosure, but its ground plan is unknown.. Numerous fragments with incised decorations attest to the use of granite. Senwosret retained a broad open causeway but we do not know how it attached to the enclosure or temple. Within the the north side of the outer enclosure the builders began eight mastabas by isolating blocks of bedrock that they then built over with mudbrick -- the same method as the pyramid. These were in addition to the tombs of princesses At the east end of the row a small pyramid, originally 27.6m square and rising to a height of 18 meters. It appears to have belonged to a Queen from the name of a vase discovered there. Senwosret II's causeway has never been excavated. The location of the of the valley temple is known but its ground plan was destroyed . Immediately to the northwest of it lay the foundations of part of Senwosret II's pyramid town, named Hetep Senwosret, "May Senwosret be at Peace'. The footprint of this town is one of the basic documents for the study of the study of Egyptian Urbanism.