The Pyramid of Senwosret I

Panel decoration from the perimeter wall of Senwosret I 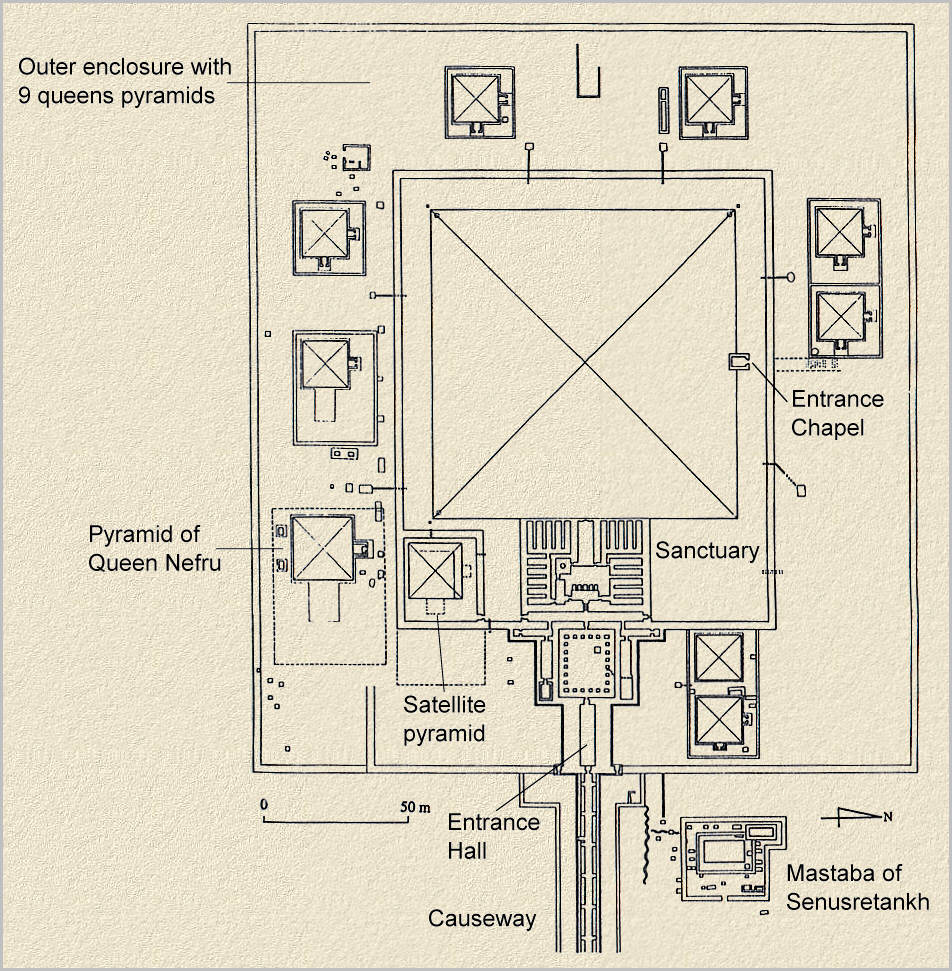 Senwosret I's pyramid is about 1.5 km south of his fathers, Amenemhet I. Archeological investigations at Senwosret I's pyramid follows a course similar to that of his father Amenemhet I. Gautier and Jéquier worked there in 1894-1895, followed by a team from the Metropolitan Museum of New York led by Lythgoe, Mace, and Ambrose Lansing (1891-1959). Arnold built on their work and the documentation they collected when he pursued his excavations in 1984 to 1987. Limestone from the local quarries was the chief material used. A stone masonry framework supported the core, which rested on a foundation platform of stone blocks. The empty space inside the frameworks was filled fragments of limestone, sand, and waste material from the construction site. The casing blocks of fine white limestone was firmly anchored in a flat trench dug around the pyramid's base. This was the method typically used by builders of the Middle Kingdom. Under the corners of the pyramid, items buried during the foundation ceremonies were found, and others lay outside. Interestingly, no stones from other pyramid complexes were found in this one. The entrance to the underground part the pyramid lay in the middle of the north side, in the pavement of the courtyard. Over it stood, as was usual in the pyramids of the old kingdom, the North Chapel. A descending corridor that began under the pavement of the north chapel did not continue, like that in Amenemhet I's pyramid, along the axis, but instead turned, as in some Fifth Dynasty pyramids, toward the southeast. At the entrance, the corridor was sheathed in granite, and the barrier of enormous blocks of the same stone, weighing as much as 20 tons, is still there. As in Amenemhet I's pyramid, the underground is filled with water, Arnold estimates that the burial chamber lay about 24 meters below ground level. The pyramid was surrounded by an inner perimeter wall that delimited the grounds of the tomb proper and the area were the dead king was worshiped (it also included the west half of the mortuary temple and the small cult pyramid). Somewhat farther away was the outer perimeter wall, which surrounded the tombs of the members of the royal family as well. The inner perimeter wall, built of limestone blocks, saw absolutely unique, On its inner side, at intervals of five meters, there were narrow panels decorated with images in bas relief's. In the lower parts fertility gods borough gifts, and above them appeared the serekh with the rulers name. On it was always his Horus name, Ankhmesut, and then either his throne name, Kheperkare, or his birth name, Senwosret.
The small cult pyramid--the last of its kind to be erected in a royal tomb complex--stood, as was usual in the earlier royal complexes of the Old Kingdom, at the southeast corner of the of the pyramid. The cult pyramid was plundered in antiquity and plundered by stones thieves. The mortuary temple, which was called "United are the [cult] places [of Senwosret]," was almost completely destroyed by stone thieves. Fortunately, however, some fairly large parts of the pavements remain and make it possible to reconstruct the ground plan.
In the relatively extensive open space between the inner and outer perimeter walls, nine small pyramid complexes were discovered, three on the north side, and two each on the west, north and east sides of the pyramid. The pyramids and mortuary temples each had their own perimeter walls.. Sometimes inside, sometimes outside these complexes were other tomb shafts, reserved for members of the royal family. So far the pyramid complex of Nefru I (Nofret) and Itakaiet have been identified. The former was Amenmehet I' daughter and a consort of Senwosret I I. The the first time in history her name was also written in a cartouche, a privilege reserved for the pharaoh alone. The valley temple now lies under massive deposits of sand between the desert and the Nile valley and has not yet been precisely located. Around Senwosret I's pyramid complex were tombs of important figures of his reign. . The most prominent of these is the tomb of Senwosretankh, which lies northeast of the outer perimeter wall of the king's complex.
The description of Senwosret's funerary monument would not be complete without at least some mention of the important discovery Gautier made there on 21 December 1884. IN hiding place north of mortuary temple, under the pavement of the pyramid courtyard, he found ten sitting statues of Senwosret I, in limestone and larger that life size. Today they are among the most famous exhibits at the Egyptian Museum in Cairo. Egyptologist are debating how the statues got there. Arnold thinks that they were put there because a change in plan of the approach corridor