Plan of the Meidum Pyramid with Mastaba no. 17 and causeway. 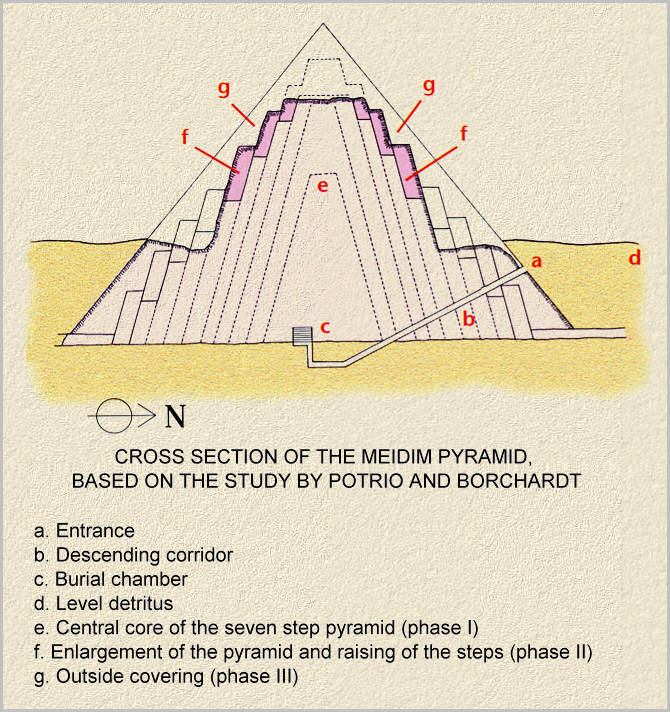 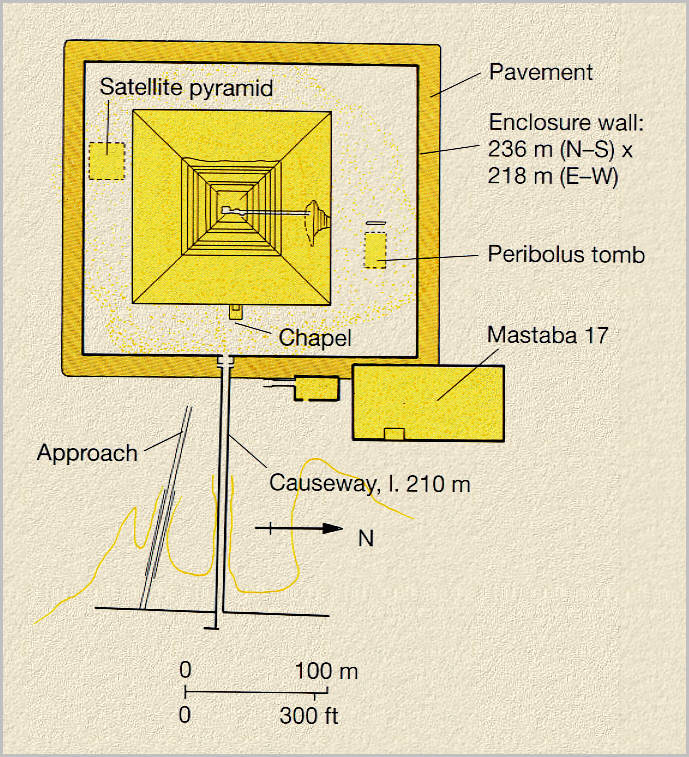 Of all the pyramids in Egypt, this is certainly the strangest looking. Believed to be a work of Sneferu and possibly started by his father Huni, the last king of the 3rd dynasty. The Pyramid at Meidum certainly represents a transition in architecture, built of large limestone blocks. It also represents the transition from the Third to the Fourth dynasties. The site was visited in 1799 by Napoleon, but the famous draftsman Denon was able to make only a few sketches and prepare a short description of the pyramid. It was investigated and measured much more carefully by Perring in 1837 and especially by the Lepsius expedition in 1843. However the inside of the structure remained inaccessible. Maspero was the first to open the pyramid and some of the mastabas in the area, in the framework of a wide-ranging archeological project whose goal was to discover and document the pyramids texts.
Archeological investigations of the Meidum Pyramid began precisely ten years later (1853). These were led by no less a figure than Petrie, the founder of modern Egyptian archeology, in collaboration with his compatriots, the Architect George Fraser and the Egyptologist Percy Newberry. They investigated the inside of the pyramid and discovered the pyramid temple, an approach causeway, and a series of private tombs in the area around the pyramid. After a long interruption Petrie again returned to Meidum with Egyptologists, Ernest Mackay and Gerald Wainright. They tunneled into the pyramid and discovered that the core is composed of five accretion layers, inclined at an angle of seventy-five degrees and standing on a square base about thirty-eight meters on a side, whose outer surfaces were built of carefully dressed limestone blocks. In the mid-1920's Borchardt arrived at Meidum and within a few days accumulated so much knowledge that it filled a whole book, still highly regarded today: Die Entstehung der Pyramide an der Baugeschichte der Pyramids bei Meidum nachgewiesen. He even reconstructed, on the basis of the ruins, a corridor leading toward the pyramid from the southeast, which Petrie discovered in 1910, and which in his opinion was used to transport construction materials. The ramp had a gradient of ten degrees and made it possible to construct the lower half of the pyramid, which composes 88.5 percent the total volume of the pyramid.. The builders increased the increased the gradient on the upper half of the ramp. In the late 1920's Kurt Medelssohn was visiting the Pyramid has a tourist and was intrigued by the mound of debris surrounding the pyramid. He published a book The Riddle of the Pyramid, which became in instant best seller. Medelssohn theories based on physics, however has not convinced Egyptologist. The bizarre, truncated pyramid is today about sixty-five meters high. Borchardt believes that the structure was built in three stages E1, E2 and E3. The entry to the pyramid is on the north-south axis, in the north wall , about fifteen meters above ground level.